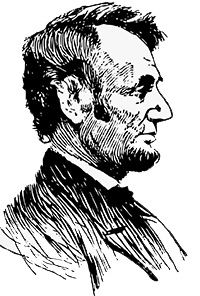 You know that Abraham Lincoln wrote the Gettysburg Address and the Emancipation Proclamation, but did you know he also penned a special order of reprieve to save the life of a turkey named Jack? The story begins on Oct. 3, 1863, when Lincoln signed an official proclamation setting aside the last Thursday in November as a “day of Thanksgiving and Praise.” That November, a citizen sent a live turkey to the White House to be part of a holiday feast. Lincoln’s son, Tad, who was 10, bonded with the bird. In addition to naming him Jack, Tad treated the turkey like a pet and taught it to follow him around the White House grounds. When Tad learned that Jack was to be killed and prepared for a big meal, he interrupted his father at a cabinet meeting, crying and pleading that his new friend be spared. Lincoln had a soft spot for his rambunctious youngest son and delayed the meeting long enough to pen “an order of reprieve” for the turkey. Tad rushed the order with him to the kitchen and proudly presented it to the ‘executioner.’ Jack then became a part of the Lincoln pets collection, which also included a pig, a rabbit, ponies, goats, cats and dogs.

Looking for more? Download a FREE copy of More Than a Meal: The Turkey in History, Myth, Ritual, and Reality (Lantern Books) by Karen Davis, Ph.D. of United Poultry Concerns (PDF download).